Call-by-push-value has a seducing PR message: Science is reductionism. Once the fine structure has been exposed, why ignore it?
Unfortunately, I'm too unsophisticated to be able to gain much insight from the CBPV papers. There's an introduction to CBPV for more mortal-like folks. Other material is hard to find.
What caught my eye was the following code sample from Paul Blain Levy's (rhymes with "all plain Stevie") PhD thesis:
thunk(print "hello1"; λz. print "we just popped" z; ...)
So, apparently you can do stuff in a function before you're even taking arguments. Interested!
Maybe one of you can provide more information about this interesting new thing?!
Posted by Manuel Simoni at 18:01 4 comments:

Looking back at predictions for 2011

▶ JSON will be the default format for new internet APIs.

I'm not sure how to corroborate this one, but I think it's true. The most significant piece of evidence I have is that IBM even developed JSONx, a standard for representing JSON as XML.

▶ As more people use JSON, we'll see a XML renaissance, as we - for the first time - discover that XML actually gets some things right.

Didn't really happen, AFAICS. But there's this post: Why XML won’t die: XML vs. JSON for your API which says: "not everything in the world is a programming-language object". +1 to that.

▶ GHC will get typed type-level programming and end this highly embarrassing state of untypedness.

▶ We'll have a verified compiler-and-OS toolchain for compiling and running some kinds of apps. It won't be x86-based.

Unfortunately, I didn't really track this issue in 2011. There's SAFE, and maybe the O'Caml folks have something to show.

▶ All kinds of stuff targetting JavaScript.


Yeah, well, that was easy. My favorite is Emscripten.

▶ Split stacks and maybe some scheduler improvements will be shown competitive with green threads in the millions-of-threads!!1! (anti-)scenario.
Nobody did this AFAIK, but I still think it's true. Maybe next year.

So, although most of the predictions were rather cautious, I'm satisified with the outcome.
Posted by Manuel Simoni at 17:32 No comments:

what distinguishes a good program from a bad one 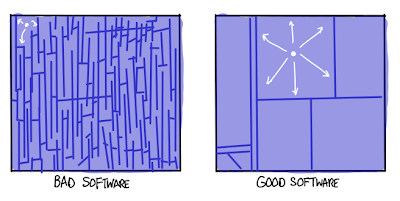 One might even say that the ability to generalize behavior of specific tests to the behavior of the program is precisely what distinguishes a good program from a bad one. A bad program is filled with many, many different cases, all of which must be tested individually in order to achieve assurance.

(HT @dyokomizo)
Posted by Manuel Simoni at 19:04 No comments:

One of my all-time favorite quotes:

Uniform Resource Locator is just the result of squeezing the term object reference through the IETF standardization process.

Posted by Manuel Simoni at 03:58 No comments: