A week of Lisp in Madrid 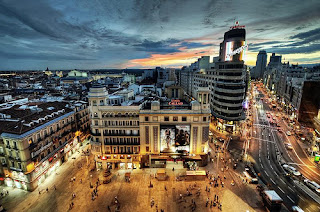 Geeks from all Lisps of life met in Madrid last week for the European Common Lisp Meeting and European Lisp Symposium 2013.

A lot of things happened, so I'll just recount the most memorable ones.

I enjoyed meeting Pascal Costanza and Charlotte Herzeel. Pascal shares my disdain for the aberration that is Lisp-1 and doesn't tire of telling Schemers so. I think he's a bit too opposed to all things Scheme though, and when somebody tells him about the niceness that is, e.g. syntax-parse, he goes all "nyah, nyah, nyah, I cannot hear you". Charlotte is one of the handful of people who understand 3-Lisp because she re-implemented it.


(Apparently, 3-Lisp is quite similar to Kernel: every operative receives not only its operand tree and the lexical environment in which it is called, but also its continuation. I still don't understand it. Why would you pass the continuation to an operative, when it can easily obtain it using e.g. call/cc? Apparently because 3-Lisp considers the continuation to exist on the next meta-level, not the current one.)

Erik Sandewall, who worked with John McCarthy, presented his document-editor/operating-system/database/agent-environment called Leonardo. We talked a lot about it, and I found out I'm working on a very similar system in my own next-gen OS efforts.

A very enjoyable talk was SISCOG: a story written in Lisp, by Tiago Maduro Dias and Luís Oliveira. SISCOG was started by two professor-level Lisp nerds in the eighties, because they wanted to apply the language to something useful. If you've ridden a train in Europe, chances are it was scheduled by one of SISCOG's apps. They employ a large number of Lisp programmers in Portugal, and reported how they view Lisp (most of them like it). Anyone who claims that dynamic languages can't be used for something other than prototyping I'd like to hit over the head with the SISCOG manual, which is probably heavy, given the highly complex stuff they work on.

One of the absolute over-the-top experiences, both geek-wise, food-wise, and otherwise-wise was the extended dinner with Ludovic Courtès (Guix and Guile), Andy Wingo (Guile and V8), Florian Loitsch (Hop and Dart), and Sam Tobin-Hochstadt (Racketeer). It doesn't get much better for a PL geek than such a barrage of PL-nerdery, funny background stories, and Spanish cakes.

Another memorable chat was with the very nice Luke Gorrie about dynlangs, networking, and immigration and property buying in the world's most agreeable country, Switzerland.

I also enjoyed the discussions between Ernst "I'm very male" van Waning and Venetian gentleman  Janusz Prodrazik, who presented OpusModus. OpusModus is a very polished tool for composers that uses S-expressions instead of scores for composition. Composers seem to enjoy it.

The last, but not least, three days I enjoyed the company of style icon Faré and Masatoshi Sano, who came all the way from Boston and Tokyo, respectively. Faré and I basically agree about all major points about how the next OS will look like, and I feel like I spiritually joined the TUNES project and made a friend. (Watch out, TUNES will be on your lap sooner than you imagine!)

Greetings to Piotr Kuchta with whom I immediately hit it off, who ported Wat to Python, and who I look forward to visiting in rainy GB.

All in all, a memorable and enjoyable week in the beautiful city of Madrid. Thanks to the organizers for the flawless execution and see you all again next time!
Posted by Manuel Simoni at 01:08

what a week that must have been... good stuff...

Gah! I knew your name was quite familiar but I was unable to connect the dots when we briefly met at ECLM. Big fan of your blog! :-)

I love your blog, Manuel, but the color scheme literally hurts my eyes. It's the bright cyan, I think.

Hi! As someone who works at SISCOG (not proggraming though), and is proud of it, it was really nice to read your short and sweet review on the Lisp that goes on here. Thanks!
Also, yes, the manual is quite heavy ;)

> in my own next-gen OS efforts.

Wow. I look forward to seeing what you come up with. Best of luck with this. Some new thinking is absolutely needed in osdev.