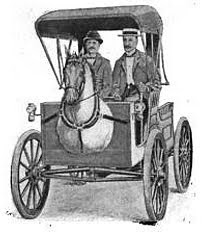 (Update: See the HN discussion for some clarifications.)
Posted by Manuel Simoni at 11:44

- If you want to learn about genetics, studying the Drosophila doesn't seem right. And the difference between "LISP" and modern Lisps is similar to that between humans and Drosophila.

- If you want to learn how to build a calculator, studying the 1-bit adder doesn't seem right. And the difference between "LISP" and modern Lisps is similar to that between the 1-bit adder and the TI-84+.

All study should occur in the large -- great post!

Yeah, I know that I'm weak in the argumentative department. ;)

"Compared to Haskell, Lisp is a big hack."

I'd absolutely love to see a future post expanding upon this sentiment.

"if you want to learn how to build a car, learning to build a horse carriage doesn't seem right."

Actually it makes a lot of sense. The first cars were in fact called horseless carriages, and learning about wheels, axles, and suspension seems like a reasonable starting point on the way to understanding a car if you don't already know about them.

The same goes for home-grown, minimal lisps. People don't implement these things because they expect to release a new language distribution as much as they want to learn the fundamentals of creating a programming language. Get off your high horse and let people be curious and tinker.

If Lisp is a big hack compared to Haskell, it would be great to understand why. How about showing a couple example problems that require hackery in lisp while remaining elegant in Haskell?